I can remember the day I became self-conscious with my body. I was a child, about 8 or so, and I was at a pool party in the two piece I'd convinced my mom to buy me. (She insisted I was much too young for one, but I insisted all the girls my age were wearing them and putting water balloons in their tops to look like they had boobs). 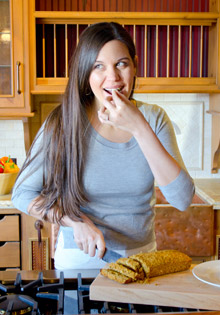 Anyway, I was so excited to be wearing that two piece. It hardly showed my stomach at all, but I felt cool, like a teenager. I was sitting on the patio, noshing on watermelon, feeling awesome as ever when an adult at the party pointed out all my fat rolls.

Looking back at old photos, I don't think I was ever much of a chubby kid, but I wasn't slender either. I probably would have been if I was active more. My mind was active, but my body wasn't. Other kids played sports and I wrote poems and short stories. Maybe you could say I had a little pudge or baby fat.

Point is, from that day forward I became self-conscious about how I looked. I'm 30 now, and I still look down when I sit in a bikini.

I lost that "baby fat" (and the adult fat that I gained too). I'd dieted, I'd exercised but I finally lost the weight - and kept it off, when I followed a low fat, plant-based diet... but there was a part of me, that self-conscious part, that was scared I'd gain it all back. So I still went to the gym. A lot.

For a few years, I was a bit of a gym rat. I had to go 5 days a week to feel sane. Sometimes I went 7 days a week. I liked working out and being at the gym so much that I became a personal trainer.

Then something happened. I don't know what exactly, but I lost my gym mojo.

It was gradual but before long I was going so infrequently that I started to think I should cancel my gym membership -- but that scared me. If I cancelled, then I wouldn't go at all --- and what would happen to my midsection? So I kept the membership hoping it would motivated me to go back to the gym.

But then life got in the way. We moved abroad and a gym membership wasn't an option. Our condo had a tiny little gym -- two treadmills, an eliptical and some free weights, and I'd go sometimes, but not regularly. There were a few months I didn't go at all.

A year later we moved back to the states -- to Colorado. I told myself I didn't need to go to the gym because I'd be snowboarding all the time. And I did snowboard pretty often, a few days a week. Usually for a few hours of time (but a lot of that time involved sitting on my butt on the lift), and given our unseasonably dry and warm winter, there were weeks we didn't get any snow and I didn't go at all. So in reality, I wasn't much more active than I had been.

So here I am, almost 2 years having not really exercised or stepped foot in a gym. I found a hunger to get back into the groove recently and found a gym that had all the things I liked: a variety of classes, a social aspect, new machines and elipiticals a plenty...

Part of "orientation" is meeting with a trainer who sees just how out of shape you are. I was dreading it. Even said "oh I used to be a PT, I can evaluate myself" but no one gets a pass.

I was delighted to see after 2 years, my weight/BMI was still in the low end of the healthy range for my height and my body fat percentage was also in the low end of "average." And since this post started out talking about midsection rolls, I looked down to verify -- I had no more rolls than I started.

I'd found my balance. I'd found what works for me. Even in a period of inactivity, I'd become able to keep my weight -- my health -- in check. It wasn't a vanity diet. It wasn't a diet that required me to exercise excessively. I just had to keep myself naturally active and eat right. Eat a low fat, whole foods diet.

I feel exercise is important -- it's great for the heart, but great for the body, and I'm happy to be back into it, but I'm also happy to know that if I stop exercising, all the weight won't come back on like it used to --- before I found out how amazing eating plants can be for me!

Get the current meal plan now.