What Weighs More: A Pound of Fat or Pound of Muscle? (& Why the Scale is a Frenemy!)

It's a common myth that muscle "weighs more" than fat, but that's not true: A pound of fat weighs the same as a pound of muscle — they're both a pound! 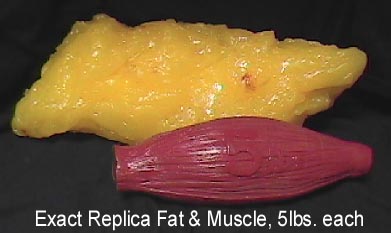 The difference is that a pound of muscle is about half the size of a pound of fat which is why the scale can sometimes be deceiving (or depressing!). You can lose inches, but weigh the same — that is why it's important to focus on how your clothes fit, too.

A common phrase thrown around the gym by trainers is "body composition" — what percentage of your weight is lean mass (muscle) vs. fat.

Here's an example: I had a client, we'll call her Julie, who weighed approximately 145 pounds when we met. Interesting, "145 pounds" was a goal weight for many of my female clients. (Note: I always tried to encourage my clients to focus on a dress size or how they looked and felt instead of a number of a scale, but most still insisted on using weight in pounds as a goal...) But back to Julie — Julie already weighed the much sought after 145 pounds, and yet she was not happy with how she looked.

Julie wanted to look trimmer. "I want to lose at least 15 pounds," she told me. Like many female clients, Julie wanted leaner legs and a tighter midsection. She also believed losing 10-15 pounds would get her there. In fact, I couldn't convince her differently, so I played along. We did a quick body comp test: Julie was 35% fat.

Initially, thanks to a new, healthier diet using a meal plan I created for her, complete with a regular workout regimen, Julie lost a little weight. She was thrilled — progress was happening!

"I lost 4 pounds!" she told me. "That's great!" I said, "So now that we know this is working, can you trust me when I tell you not to weigh yourself on a scale anymore?"

Julie stared at me like I was crazy. Actually, she called me crazy. Three times. Then she agreed to give it a try. I'd bargained with her: Julie could weigh herself if — and only if — her clothes started feeling tight. If they felt the same or loose, she wasn't allowed to look.

Several months later, we had a totally new Julie. She was beautiful before, but now Julie really shined. She was trim and glowing. She had a fit, healthy look about her. She'd also had to buy all new clothes because her old ones were too big.

If you asked Julie, she would have told you she lost those pesky and unflattering 10-15 pounds, but when I finally let her get back on the scale? 145 lbs. 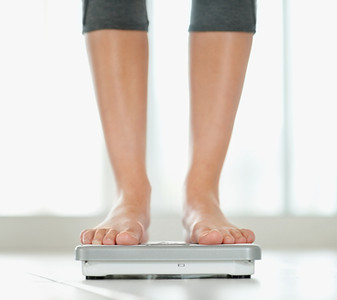 Julie had shed fat and loaded up on muscle! She was a walking testament that "145 pounds" really didn't mean anything. Julie at 145 pounds and 20% body fat looked smaller, healthier and fitter than her former 145 lb. self at 35% fat.

Muscle and fat may weight the same, but their appearance is quite different on the body!

Moral of the story? If you don't see immediate results on the scale — don't feel discouraged. Don't get caught up in the numbers game when you're making positive steps forward!

A healthy diet is the key to weight loss. Eat Right! Get the current meal plan now.