Should you track your calories?

(This post is also a podcast episode! Listen here.)

Alright, so you’ve heard me say a hundred times that weight-loss is physics. That you have to consume less energy than you burn (create a deficit) to lose weight. That’s the beautifully simple part.

Here’s the not-so-simple part: a calorie is not always ‘a calorie’ so it’s not a straight math formula.

For example, not every calorie is ABSORBED the same way.

By cooking or processing our food, we are better able to absorb the nutrients (and also the calories) in that food.

This means calories from predigested foods (like smoothies or hummus) or highly processed foods (like Oreos) are absorbed much more easily than whole foods. Meaning, you might not absorb the full bioavailability of the calories in an orange, but you’re probably going to absorb every last calorie in a Dorito.

“From your lips to your hips” is very real, ESPECIALLY when it comes to highly processed foods.

{Side bar: There’s also new research that some people absorb calories more easily than others, so it’s not purely a difference in metabolism as we once thought.}

Not every calorie is NUTRITIONALLY equivalent, either.

Or let’s compare 100 calories of apple juice (⅞ cup) compared to 100 calories of an apple. The whole apple has 5 times more protein and 4.4x more fiber. The juice is basically sugar water. You might as well eat sugar packets.

And remember, you’re more likely to absorb every single calorie in the oil or juice.

These examples also nicely prove my next point, which is:

Not every calorie satiates in the same way.

You’ve experienced this before when you ate a doughnut and were starving an hour later.

But even whole plant foods vary greatly in satiety.

A boiled potato, for example, is the most satiating food there is.

This was partly why I hit a hard plateau with my weight-loss, even though I was plant-based.

Using the meal plans helped me with calories and portion control, but they also TAUGHT ME what a meal has to look like.

What kinds of satiating foods need to be in my meal so I’ll actually feel satisfied and not overeat.

There are still MORE problems with counting calories.

The big one being we actually have no idea how many calories are in any given food.

And I’m not just referencing apples or oranges that don’t come with a label.

The biggest source of error with calorie determination is portion size, and we’re all really bad at guessing, which is what we’re doing with calorie calculator apps like MyFitnessPal.

If you’re not measuring and weighing everything extremely carefully, you’re going to be off. And even if you ARE extremely precise, you’re still going to be off because labels and USDA estimates are, well, only estimates!

The calorie gives us an unfair sense of precision, which is why relying on it can be so detrimental to weight-loss.

This is especially true if you’re also exercising, because we tend to OVERESTIMATE the calories we burn. (Machines, expensive watches, and apps are far too generous as well.)

I tracked my calories for a long time and it was beneficial in the beginning because I was completely in the dark about how many calories were in foods and I had major portion distortion going on. Tracking became a teaching tool that helped me make better choices.

For example, I would ask myself: "What would fill me up more, ¼ cup of almonds or almost 2 whole cups of blueberries?!" (They’re the same amount of calories.) 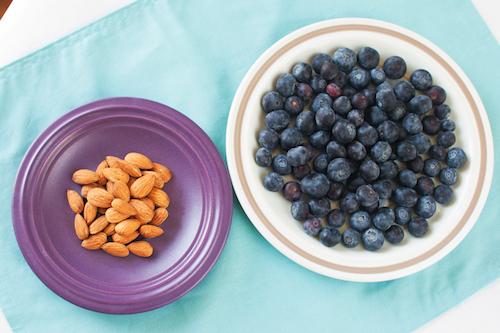 But then this practice took a less helpful turn when I started looking at my app to see how many calories I had left in order to justify eating, typically off plan, and often when I wasn’t even hungry.

Eventually I stopped losing weight. This was incredibly frustrating to me because what had been working so well now suddenly wasn’t and according to my app, I wasn’t “going over my calories” so why the heck wasn’t I losing?

Now I understand why: because I didn’t really have that many calories left. It’s just not that precise and I was nullifying my deficit (because the one and only beautifully simple part to all this is that weight-loss requires a caloric deficit).

For a while I simply journaled, meaning I wrote down what I was eating on paper but it was only a list of what I ate. I would have to do math on the spot to get any kind of number and since I’m lazy, and not great at math, I never did. The list was there to remind me of what I had eaten so I could keep accountable and also say to myself, “You just had all this food an hour ago. You’re not actually hungry. This is bored or emotional hunger.”

This is EXACTLY what Laura, one of our members said, too, when I asked if people tracked their calories, journaled, or just followed the meal plans.

Here are what other members said:

What can we glean from their experiences and all this information?

The calorie is useful as a relative measure which is why we still use it when building the meal plans.

Tracking can also be a helpful learning tool or resource for feedback, particularly when you’re first getting started.

Keeping a log (but not tracking exact calories) can also be incredibly helpful if you are an emotional eater, overeater, or mindless muncher.

BUT tracking your calories isn’t something you can rely on like religion.

And it’s not enough by itself.

PLUS a calorie is not always ‘a calorie.’ As we learned in this podcast/post, some calories are more easily absorbed than others, they aren’t always nutritionally equivalent or satiate in the same way, and so on.

When it comes to weight-loss, focus on nutritious foods that make you feel FULL and for a long time, but on a smaller amount of calories. Which is EXACTLY what we do with the meal plans each week.

Get started on the meal plans right here. (They definitely take all the headache out.)